"Where is the money supporting these radicals coming from? . . .  It appears likely that at least some of the asserted violence and anarchy is in fact instigated by agents provocateurs funded by our own secret police."

What is happening in Portland isn't right. But it isn't new, either.

In the 1960's the FBI spied on Martin Luther King and it set up the Black Panthers to be charged with gun crimes by supplying them with guns. My cousin tells me stories about his service in the Army in the early 1970's. His job was to file daily reports on Black protesters in Los Angeles, using sources infiltrated secretly into those groups.

Today's Justice Department is justifying using extra-legal steps in Portland. They assert that the two men they strong armed into unmarked vans then brought to an interrogation room were not actually arrests. The law is utterly clear here. They were detained, restrained, and put into custody. That is an arrest. They know it

They are arresting people for being in the presence of a protest, then requiring them to sign agreements not to attend further protests, as a condition of being released from a miserable holding cell. It is a right to assemble peaceably. They know those conditions of release will be deemed unconstitutional when, eventually, they get seen by a judge.

What is happening in Portland is unusual in how openly--proudly--Trump ignores both constitutional rights and long established norms. He is making a statement, that he will use political, police, and military power as he sees fit against people who oppose him. He did it to Jeff Sessions. He does it to protesters. He says he is doing it to China. There is a political market for this kind of talk and behavior; many people admire the strong man unencumbered by law and democratic norms. Republican voters seem to like it just now.

The investigations into Russian assistance given Trump's 2016 campaign created a mindset among Democrats that the FBI and CIA were generally good actors, free of improper political agendas to carry out secret extra-legal policies of the president. Moreover,Trump criticizes the FBI and CIA, which further solidifies them as people of integrity, who resisted Trump. Democrats may have been lulled to sleep and forgotten history. The Justice Department is led by Bill Barr, and the CIA and Defense intelligence forces are led by Trump appointees. Of course, it is political. 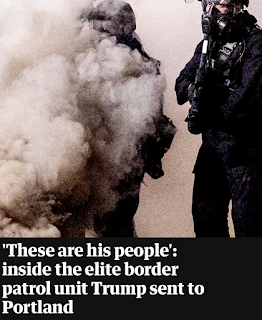 Trump needs an issue to turn around his campaign, and anarchy and violence in Portland appears to be his chosen vehicle. Why the continuing violence? A good question, most quickly answered by asking another one.

Who benefits?  Trump thinks he does.

John Olson was a college classmate, then a lawyer, and then a bankruptcy judge. He has a perspective gained from history on what might be happening in Oregon's Portland. The idea that Trump might use the power of government secretly to undermine the credibility of opposition isn't preposterous. It is standard practice by governments that find themselves in trouble.

I view the sixty days into demonstrations in Portland, Oregon, from a small city on the other side of North America — the original Portland, on the shores of Casco Bay, Maine.

From here, what’s going on in the Northwest looks like the actions of Narodnya Volya (“People’s Voice”), which emerged a few years after Tsar Alexander II freed the serfs in 1861. Understandably dissatisfied with the pace of his reforms (which look meaningful albeit insufficient to Western moderates 150 years later), some Russians were radicalized. There was an unsuccessful assassination attempt on the Tsar in 1867. That had the effect of giving more apparent power to right-wing forces who were opposed to all of Alexander II’s reforms. Although slowed down, reforms nonetheless continued.

Narodnya Volya succeeded in assassinating Alexander II in March 1881, thereby bringing in extreme right-wing autocracy in the personage of his son, Alexander III. The two Narodnya Volya assassins (a third was waiting in the nearby) blew up the Tsar with dynamite.

The new regime of Alexander III immediately created a monstrous secret police, the Okhrana, which survived until the Bolshevik revolution of 1917. From the early days of the new regime, Narodnya Volya and other opposition groups — radical and moderate — were infiltrated by agents of the Okhrana, who acted as both informers and agents provocateurs.  Thus, the most radical groups opposed to the regime were in fact funded by the tsarist secret police, who were simultaneously stirring up revolt, suppressing it, and in the finest of bureaucratic traditions, justifying increased budgets by “proving” that they were essential to the survival of the regime. Perhaps the ugliest of these provocations was Bloody or Red Sunday in January 1905, when unarmed demonstrators led by a supposedly-reformist priest, Father Georgy Gapon, who was actually an Okhrana agent, were fired on by the Imperial Guard as they marched toward the Winter Palace to present a petition to Tsar Nicholas II. This triggered the 1905 Revolution, ultimately and brutally suppressed by the regime.
So what do we see now in the Northwest? Extreme radical folks seeking to subvert the legitimate efforts of Black Lives Matter to effect social and political change so as to impose their own version of radical change. We’re not talking about Universal Health Care or Reparations here.

Where is the money supporting these radicals coming from? Are they led by agents provocateurs?  And if they succeed in provoking predictably violent, almost-certainly intended reactions from the Administration’s own secret police, the anti-democratic Customs and Border Patrol, who benefits? CBP’s stated goal is to become the “marine corps of the US federal law enforcement community” and it asserts that its agents are not required to adhere to the same constitutional restraints on the use of force as other law enforcers. “We are not cops,” said David Aguilar, formerly the head of CBP.

Assuming, of course, that the federal agents operating in Oregon without badges or identification are actually CBP agents, and not some private army cobbled together from the likes of the Blackwater “contractors” run by Betsy DeVos’s brother Eric Prince.

Trump is now threatening to send 75,000 CBP agents into US cities to tackle what he claims is an epidemic of violence and anarchy. But it appears likely that at least some of the asserted violence and anarchy is in fact instigated by agents provocateurs funded by our own secret police.

In this year of pandemic incompetence and economic disaster, this Administration can only succeed politically if the violence of this secret police can been seen as necessary to protect the Nation. And only One Man can do that, etc.

Trump himself knows nothing. Putin and William Barr know a lot. We are back to 1881.

Posted by Up Close: Road to the White House at 7:46 AM

There’s a problem with this theory. Hyper-violent black bloc antifa-style protests have been happening in the northwest since at least the 1999 WTO protests in Seattle, long before the Trump administration. Are we to believe that this was the policy of the Clinton, Bush, and Obama administrations too?

In answer to Michael Trigoboff and to the article, - yes, I believe that the agents provocateurs have been around for a long time. I found out by googling one of those pages that "found" my information that I am on an FBI-CIA list, from my anti-war activities from the 1960's I presume. Back then, we suspected infiltration by government agents into the structure of SDS, and other groups. I dropped my SDS association after seeing that fact. And I believe that they led the charges on occasion.
Even paranoids have real enemies. I have the original button from the 1960's!

I agree with John Olson that there are troubling similarities between the performative violence of the Portland/Seattle extremists and the spectacular 'propaganda of the deed' by Russian anarcho-populists of the late 19th century. I noted the similarity in an earlier post. They are troubling because the Russian "People's Will" were successful in motivating not just a secret police but also a grimly pragmatic (and ultimately totalitarian) brand of Marxism.

As John notes, the Russian Okhrana had agents inside the revolutionists' cells, urging them to further outrages. And yes, there are agents provocateurs amidst the Antifa in Portland. But I would urge our side to not take the easy way out here. Why are many protestors so susceptible to agents provocateurs? They should have to work a little harder. It's our problem, because our Boys in Black Balaclavas, wanting too much to be a Hero of Our Time (another Russian reference), are too easily provoked.

From 1972 to 1980 I was something of a fixture on the New Orleans left. I had romantic dreams to be sure, but knew that playing James Bond would make me James Dead. And that a guy like Harry "Guy" Schafer had to be either crazy or an FBI agent (it turned out the be the latter). And that it really made *no difference*. Thank god, because Schafer called me asking for help in getting small-arms to Native Americans at Wounded Knee. I hung-up and never spoke to him again.

So much for our Boys in Black. As for our Moms in Yellow -- they are too ready to accept antifa-anarcho 'diversity' of tactics in their 'largely peaceful' demonstrations. They need to disassociate themselves. Otherwise, they look like non-violent cover for decidedly violent activity.

Not just the peaceful demonstrators, but Democratic politicians, from Joe Biden on down, should:
A) Call on peaceful protestors to get off the streets at night.
B) Condemn all violence against property and especially against persons perpetrated by a small band of extremists.
C) Demand the Federal troops leave.

We are facing not ordinary police, but elite state forces specialized for violent crowd suppression. With vague and varying identification, they can be reinforced by private paramilitaries like the Proud Boys or Boogaloo. A WaPo feature www.washingtonpost.com/politics/2020/07/28/conservative-armed-militias-protests-coronavirus/ shows that this is already happening. These are basics to the recipe for a police state, as much as sugar for making cookies. Antifa is making it too easy for Trump. We need to start making it harder.

According to the NYT, federal police have agreed to withdraw. Declare victory and retreat? Another Trump flip flop to be used by Joe? It’s hard to keep up...

Admitting Michael’s premise as a justification for federal presence:

Follow by Email You get "home delivery" of my blog

Links to my videos and podcasts