Walden has a brand problem. He lied.

Greg Walden repeatedly said one thing in the District--then did the opposite back at the Capitol.

Jamie McLeod-Skinner is calling him on it.


She has a video up.

The tone is disappointment and resolve. It starts by showing Walden lied to us regarding his support for access to health care. She follows by showing she is the right person to replace him. Take a look: Click Here.

It is a powerful, well-produced video. Viewers come away liking her.

It starts with an argument for change. He lied to us, repeatedly, about what he would do regarding health care. I personally saw Greg Walden in a Medford Town Hall, in an event similar to the one shown in the video. Citizens filled the North Medford High School Gymnasium. I was struck by his empathetic, earnest demeanor. 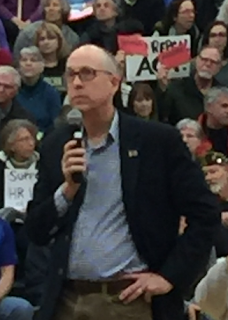 And Mr. Nice Guy agreed with the audience on the issue of health care. The audience overwhelmingly wanted health care access maintained, with two specific areas of concern: people receiving health care via the Oregon Health Plan through expansion of Medicaid, plus people who had pre-existing conditions.

Walden said yes. He agreed. He was with them.

He didn't condemn or talk about limiting "Obamacare" with words of "we need to make hard choices," or "life is unfair." It was the opposite. He said he understood people with pre-existing conditions want insurance, and he will protect those good people.  He said he understood the value of the Oregon Health Plan, and he wanted to preserve the expanded access.

Back at the Capitol, he worked and voted to end those two key provisions.

Two battling images of Greg Walden. One is the brand he has created for two decades, Mr. Nice Guy, the moderate, the aw shucks guy in a checkered shirt, who wants government to help vulnerable people. He raised over four million dollars from industry PACs and is spending it now to reinforce that image. I hear frequent radio ads on AM band talk stations with him speaking earnestly about his concern for the opioid crisis and his concern for veterans.


The alternative image is the one Jamie McLeod-Skinner reveals. Mr. Hypocrite, the wolf in sheep's clothing, the guy who says one thing here and does another back in DC.

The video's tone is actually positive, not negative. No scary sound and grainy black and white photos to cue people we are looking at a villain. It does not say "Walden sold us out," nor point to the connection between his behavior in DC and the interests of health insurer or drug company donors.

The video presents an alternative person--McLeod-Skinner-- to fill much the same Nice Person brand. Sincere. Down home. Jeep. Engaged. Jamie Is essentially presenting herself as a genuine and authentic replacement for the brand category District voters have been voting for for two decades.

Will it work?  McLeod-Skinner would need this video to get around and circulate, and she has the social media and volunteer base to get it done.The video works. She looks appealing; Walden looks hypocritical.

She has a big task. Walden has a huge head start in brand building, and Walden is doing a repair strategy with his new-found discovery of an opioid crisis. His ads show him in support of government doing more for vulnerable people--the opposite message revealed by his kill-the-ACA work.

The video builds her up, but it does not drive home the betrayal that would be the core of undermining the Walden brand. My own sense is that McLeod-Skinner--or someone else--will need to make a sharper accusation of Walden for there to be sufficient opening for McLeod-Skinner to be a replacement for Walden. Someone needs to point a finger of blame. You lied to us in those Town Halls. Some 60,000 of your constituents were put at risk of losing health care by your actions. People with pre-existing conditions are losing insurance right now.

For McLeod-Skinner to replace Walden's brand, his brand needs to be "broken," i.e. shown to be false. Who could do that to Walden? Only Walden himself. He broke it by leading the Committee that worked to destroy, not fix, the ACA, notwithstanding his Town Hall assurances.

His brand is broken. The question is whether people will notice.

Kudos for promoting her video.

It's a bit folky for me, and perhaps veers off topic...by the end we've forgotten about the attack on the incumbent...the Fox News clip is cute...but could be the basis for a 30 sec broadcast ad if it adds some factual documentation. The inclusion of the Trump/Walden reference is confusing.

My sense is that Walden's support is cooked in due to his long tenure and that supporters care about immigration, gay marriage and guns more than health care or opioids. I wouldn't be surprised to see dog whistle ads about those issues at some point from Walden.

Our candidate's biggest hurdle with uncommitted voters is that she needs to create parity with Walden as a competent potential legislator. Washington DC shapes them, not the other way around...not yet. Voters need to see her in the seat.

After reviewing our Independent candidate from your blog of a couple days past I think I know who Walden might not want to meet in a debate. The guy is brash but he takes no prisoners and after reviewing his twitter and fb page he's been ripping Walden for a long time. Jamies video is a little folksy, she can do that all day but it won't change any hearts and minds.

Up Close: Road to the White House said...

Response to "anonymous" above.

Because it is unsigned, I am going to assume it was written either by that candidates, Mark Roberts, or by campaign ally. Yes, his twitter activity is brash. I invite Roberts to give an on-the-record explanation of what in the world he was thinking when he tweeted that Melania Trump was a prostitute (whore who works by the hour) and why he thought that trolling one of his critics--someone with a presumedly Jewish name--for her Jewishness. It gives me deep concern about his seriousness as a candidate.

Or he can hide out. But not here.

Follow by Email You get "home delivery" of my blog

Links to my videos and podcasts